Impact of wagering inducements on the gambling behaviors of online gamblers: a longitudinal study based on gambling tracking data

Aims. To estimate whether the use of wagering inducements has a significant impact on the gambling behaviors of online gamblers and describe this temporal relation under naturalistic conditions. Design. This longitudinal observational study is part of the second stage of the Screening for Excessive Gambling Behaviors on the Internet (EDEIN) research program. Setting. Gambling tracking data from the French national online gambling authority (poker, horse race betting and sports betting) and from the French national lottery operator (lotteries and scratch games). Participants. A total of 9306 gamblers who played poker, horse race or sports betting and 5682 gamblers who played lotteries and scratch games completed an online survey. The gender ratio was largely male (around 90% for poker, horse race betting and sports betting and 65% for lotteries). Median age ranged from 35 (sports betting) to 53 (horse race betting and lotteries). Measurements. The survey used the Problem Gambling Severity Index (PGSI) to determine the status of the gamblers (at-risk or not). Gambling tracking data included weekly gambling intensity (wagers, deposits), gambling frequency (number of gambling days), proxies of at-risk gambling behaviors (chasing and breadth of involvement), and use of wagering inducements. Findings Use of wagering inducements was associated with an increase of gambling intensity (β between -0.06 [-0.08;-0.05] and 0.57 [0.54;0.60]), gambling frequency (β between 0.12 [0.10;0.18] and 0.29 [0.28;0.31]), and at-risk gambling behaviors (odds ratio between 1.32 [1.16;1.50] and 4.82 [4.61;5.05]) at the same week of their use. This effect was stronger for at-risk gambling behaviors and at-risk gamblers. Conclusions. Wagering inducements may represent a risk factor for developing or exacerbating gambling problems.

Behavioural addictions (BAs) [gambling disorder (GD), food addiction (FA), sexual addiction (SA)] may lead to disastrous consequences. They are often associated with other addictive or psychiatric disorders, and high rates of suicide attempts. Epidemiological studies report prevalence reaching 2.7% for GD, 5% for SA, and up to 7.9% for FA.
Many similarities have been highlighted between BAs, as well as with substance use disorders. One core clinical similarity between those disorders is craving (uncontrollable urge to engage in rewarding behaviours), which has been consistently associated with diminished control over the behaviour and relapse.
Whereas cognitive behavioural therapies have demonstrated their efficacy for the management of BAs in the short-term, the extent and durability of their effects are still unknown. Drop-outs are frequent, as well as relapses, with for example more than 70% of patients presenting recurrence of gambling behaviour at 12-months follow-up.
At present, no pharmacological treatment has been approved for BAs, but several medications have been tested. Among them, two opioid receptor antagonists - naltrexone and nalmefene - appear the most promising. By decreasing dopamine neurotransmission in the reward circuitry, they reduce both excitement for rewarding behaviours and craving.
Compared to naltrexone, nalmefene seems to have a better safety. To date, no study investigated the efficacy of nalmefene as a pan-addiction treatment for BAs. Two clinical trials have demonstrated its efficacy for the treatment of GD, but no clinical trial was conducted for FA and SA.
We hypothesise that nalmefene (36 mg/d), compared to a placebo, can have a therapeutic effect as an add-on to usual treatment for decreasing craving in several BAs. The NABAB study could therefore lead to the development of guidelines incorporating a drug option for treating BAs. The project will also investigate the genetic predictors of therapeutic success, which may improve knowledge on the genetic determinants of the nalmefene action.
Nalmefene holds a marketing authorization at the dosage of 18 mg/d in France for alcohol use disorder only. The choice of the dosage tested in this study (36 mg/d) results of a balanced decision between efficacy (demonstrated at 40 mg/d) and safety (poor from 50 mg/d), as observed in the two trials on GD. Moreover, our study will comprise “real-life” conditions: (i) patients who are often excluded from clinical trials on addiction, i.e. females, patients with psychiatric/addictive comorbidities and concomitant substance consumption, or treated with concomitant psychotropic medications, provided that nalmefene is not contraindicated; (ii) all therapeutic goals, either regaining control over the addictive behaviour or achieving abstinence. This may favour the applicability of the treatment in real-life and the generalizability for all patients that could benefit from it.
The provision of well-tolerated and inexpensive drug treatment would allow easier accessibility to care, for example in primary care such as general practice, and in the management of patients who have difficulty engaging in specialized care.

Complex interventions include several components that may interact with one another. In health service and public healthresearches they are often assessed with cluster randomized trials, which randomize intact social units. In these trials, whichpopulation is to be analyzed is a challenging issue. The boundary between lack of compliance and adaptation of the intervention tothe context is tenuous; participants may lack compliance because of their own willingness, or because of external events; becausethe intervention may be adapted to the context, an “as treated” population is also of interest. We definitely need guidelines on thisissue. On a statistical point of view, such trials are also challenging. While an adjusted risk difference is the preferred way ofexpressing results, classical statistical analyses usually return odds ratios. We presently lack clear recommendations on the optimalstatistical method to be used. The ESCIENT project aims to close these two gaps. 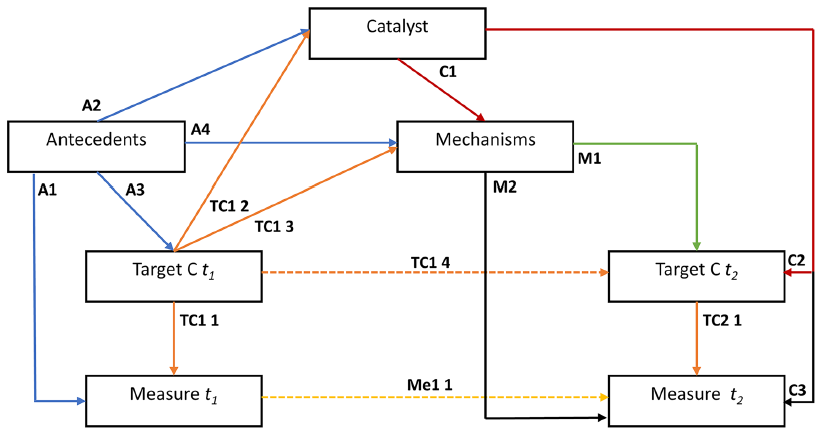 This work is part of an international initiative: the Response Shift - in Sync Working Group.

Purpose The extant response shift definitions and theoretical response shift models, while helpful, also introduce predicaments
and theoretical debates continue. To address these predicaments and stimulate empirical research, we propose a more
specific formal definition of response shift and a revised theoretical model.
Methods This work is an international collaborative effort and involved a critical assessment of the literature.
Results Three main predicaments were identified. First, the formal definitions of response shift need further specification
and clarification. Second, previous models were focused on explaining change in the construct intended to be measured
rather than explaining the construct at multiple time points and neglected the importance of using at least two time points
to investigate response shift. Third, extant models do not explicitly distinguish the measure from the construct. Here we
define response shift as an effect occurring whenever observed change (e.g., change in patient-reported outcome measures
(PROM) scores) is not fully explained by target change (i.e., change in the construct intended to be measured). The revised
model distinguishes the measure (e.g., PROM) from the underlying target construct (e.g., quality of life) at two time points.
The major plausible paths are delineated, and the underlying assumptions of this model are explicated.
Conclusion It is our hope that this refined definition and model are useful in the further development of response shift theory.
The model with its explicit list of assumptions and hypothesized relationships lends itself for critical, empirical examination.
Future studies are needed to empirically test the assumptions and hypothesized relationships.

This work is part of an international initiative : The Response Shift - in Sync Working Group.

Purpose This work is part of an international, interdisciplinary initiative to synthesize research on response shift in results
of patient-reported outcome measures. The objective is to critically examine current response shift methods. We additionally
propose advancing new methods that address the limitations of extant methods.
Methods Based on literature reviews, this critical examination comprises design-based, qualitative, individualized, and
preference-based methods, latent variable models, and other statistical methods. We critically appraised their definition,
operationalization, the type of response shift they can detect, whether they can adjust for and explain response shift, their
assumptions, and alternative explanations. Overall limitations requiring new methods were identified.
Results We examined 11 methods that aim to operationalize response shift, by assessing change in the meaning of one’s
self-evaluation. Six of these methods distinguish between change in observed measurements (observed change) and change in
the construct that was intended to be measured (target change). The methods use either (sub)group-based or individual-level
analysis, or a combination. All methods have underlying assumptions to be met and alternative explanations for the inferred
response shift effects. We highlighted the need to address the interpretation of the results as response shift and proposed
advancing new methods handling individual variation in change over time and multiple time points.
Conclusion No single response shift method is optimal; each method has strengths and limitations. Additionally, extra steps
need to be taken to correctly interpret the results. Advancing new methods and conducting computer simulation studies that
compare methods are recommended to move response shift research forward.

Two pages on SPHERE in the latest issue of Inserm, Le magazine!

Find all of Sphere's tweets here - If you can see this, your browser is hiding the twitter block from you.